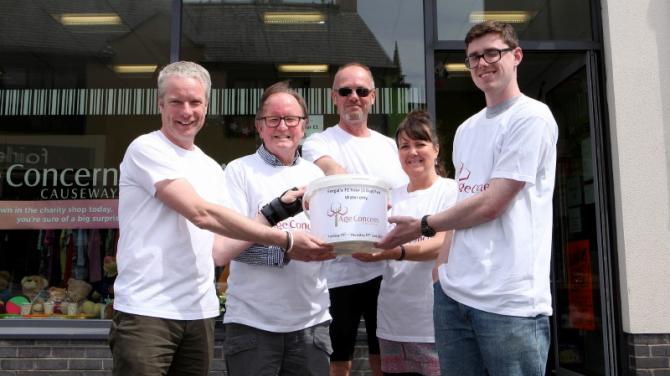 A BIG-HEARTED Portrush man has raised £1,785 after fasting for three days to highlight the plight of elderly people across the borough living in food and fuel poverty.

Father-of-three Fergal Quinn, who is Manager at the Coleraine-based Age Concern Causeway charity, survived on just water during his 72-hour fundraiser last month.

Fergal's fast began with a stint at the charity shop before he moved on to Causeway Hospital's main reception and Ground coffee shop in Coleraine's Kingsgate Street for the final day of his fundraiser.

As well as raising awareness of food and poverty, Fergal, 52, wanted to highlight the much-needed work of Age Concern Causeway and raise vital funds for the charity's Advocacy and Information Service.

Thanking all those who supported him during the three-day challenge, Fergal said: “A special word of thanks goes to the staff and customers of the Springhill Bar in Portrush who generously allowed us to collect and donated a bottle of whiskey for our raffle.