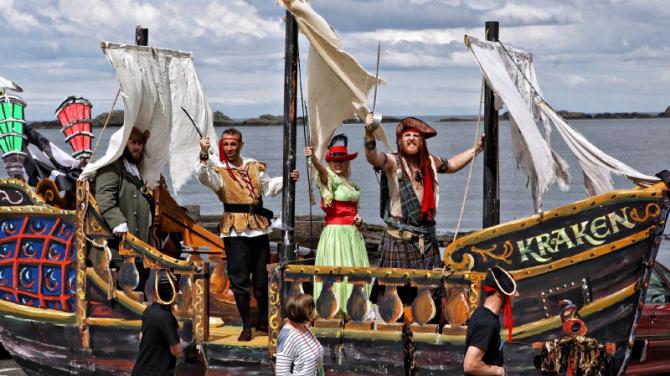 It is run by Portrush Heritage Group and financed by Causeway Coast and Glens Borough Council and Portrush businesses with Morelli's the lead commercial sponsor. All events are free admission.

Each year in the Children's Pirates Festival on Saturday, June 29 Tavish finds himself in a new adventure.

His 2019 adventure is based around Tavish and his Pirates coming across a Time Traveller called ‘The Doctor’ who tells them about the trickery of the Leprechauns on the people of Portrush.

King Fergus, King of all the Leprechauns, and his people are stealing the holes from Royal Portrush’s world-famous Dunluce Course.

The Leprechauns are livid because they lived in the sandhills all over the golf course and are sick, sore and tired of being struck or bowled over by golf balls!

“It wouldn’t have been so bad if the golfers had stuck to playing on the nicely cut parts,” said King Fergus. “But no, nothing seemed to please them more than tramping through and playing shots from the long grass.”

However, stealing the holes from the greens did not please the golfers; nor did it please the Secretary Manager Wilma Erskine and Head Greenkeeper Graeme Beatt who insisted that the holes be returned and put back on the golf course. The course must be ready for The Open!

A call goes out for Tavish Dhu, the Pirate Off Portrush, to help overcome the Leprechauns, stop their shenanigans and save the Open Golf Championship.

Well, I’m very sorry but if you want to find out if Tavish can overcome King Fergus and his Leprechauns and if the Head Greenkeeper can get the holes back in the greens in time for the Open Championship to take place, you’ll have to come along with everybody else to the Amphitheatre on Saturday 29th June and watch Pirates Off Portrush, Time Travellin’ Tavish!