Cave out of bounds for 'longer than antipated' 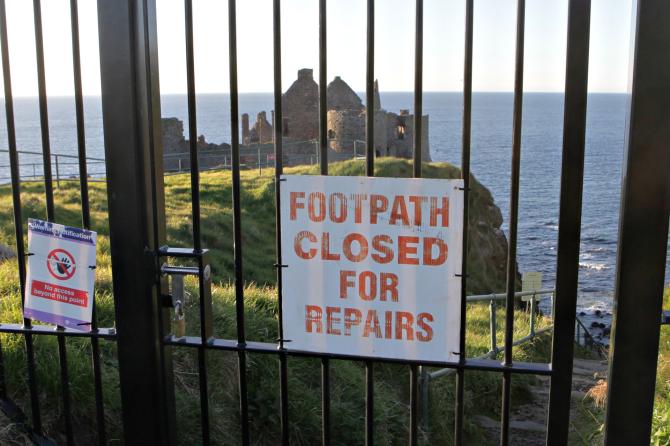 Access closed to the cave below Dunluce Castle. WK19KC13

CAUSEWAY Coast and Glens Council has confirmed it's to conduct an investigation into public rights of way at Dunluce Castle.

The probe was prompted by concerns over blocked access to the cave beneath the ruins.

Barriers were erected at the Fairy Cave entrance in January last year amid concerns over public safety.

The Castle saw its busiest April on record,  according to the Department for Communities Historic Environment Division which manages the site.

It says crucial work being carried out at he cave is taking longer than anticipated.

But the delay in reopening the cave prompted UUP Councillor Norman Hillis to ask officers at Cloonavin to investigate the wider issue of public rights of way.

In Northern Ireland it's up to local authorities to assert, protect and keep open any public rights of way as well as map and record where they exist.

Councils must also enforce the public’s common law rights of passage and investigate threats to access.

In a statement a Causeway Coast and Glens Council spokesperson said: “The current position is that Council has had initial discussions with Historic Environment Division regarding the matter in advance of a formal investigation.

“As with any investigation it is difficult to confirm as to when it will conclude.

Mr Hillis told the Chronicle: “People have always been able to explore the cave, as far back as I can remember without paying for access to Dunluce Castle.