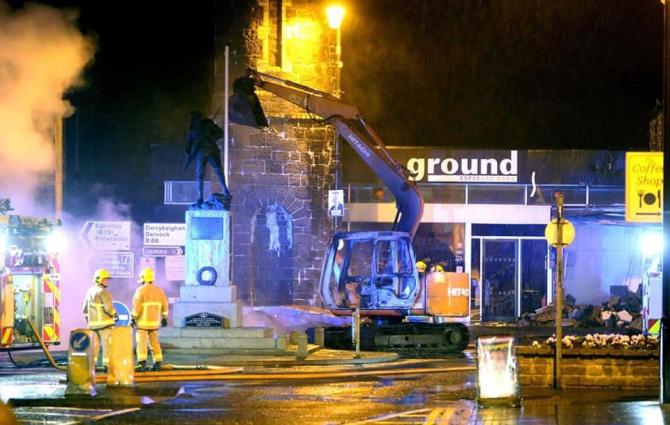 The PSNI have recovered an ATM machine which was stolen from premises in the Market Square area of Bushmills in the early hours of yesterday morning, Tuesday 16 April.

Detective Chief Inspector Dunny McCubbin said: “Following the theft of an ATM which was stolen from premises in Bushmills earlier this morning, we have now recovered the machine and examinations are now being carried out.

“This ATM theft was the ninth this year and I understand the concern of the public and the business community. As in all of these ATM thefts, the actions of these criminals have not only caused immediate financial harm to the business that was targeted, but they have caused devastation to the local community.

“I want to reassure the public that we continue to take this matter extremely seriously. I understand the fear that these attacks are causing, and the damage that is left in the wake of each theft. We are doing all we can to catch the people responsible and stop these attacks.

“Last month we increased the amount of resources dedicated to tackle this issue and local police patrols are actively patrolling vulnerable and high risk locations. We also continue to work with partners in the banking and retail sectors regarding crime prevention.

“I want to thank the public who continue to be our eyes and ears, reporting anything suspicious to Police. I also know that many owners of plant machinery have been taking on board our advice to secure and lock up equipment and install immobilisers and this has helped to prevent theft. I would ask for the public to continue supporting us in our efforts to stop these terrible crimes.

“I want to appeal to anyone who has any information about today’s ATM theft in Bushmills to speak to us. Did you see a digger on a low loader being towed by a tractor on the roads in the area? Did you witness the attack just before 3.30am this morning? A telehandler was also used in the commission of this crime and I believe this was used to transport the ATM from the Diamond area of Bushmills.

“We would also like to speak with anyone who saw or heard anything in the area of the Ballyhome Road early this morning. Please contact detectives at Coleraine CID on the non-emergency number 101 quoting reference 106 16/04/19. Alternatively information can also be provided to the independent charity Crimestoppers on 0800 555 111, which is 100% anonymous and gives people the power to speak up and stop crime.”