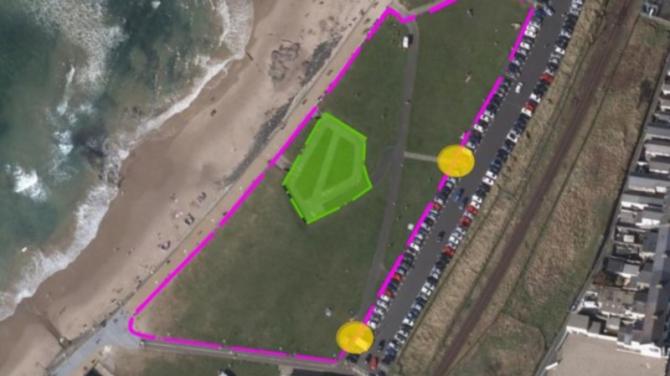 PLANS to refill a sunken seating area at West Bay in Portrush have been approved.

The £117,000 landscaping scheme, funded by Stormont's Department for Communities, aims to create an events venue and temporary car park during the Open and other major occasions.

The proposal received the green light from Causeway Coast and Glens Planning Committee on Monday, April 1.

The project is part of the government’s £17m Portrush Regeneration Programme, and will complement other schemes in the town prior to the 148th Open in July.

The work, which will be getting underway shortly, will involve filling in one of two run-down sunken seating areas to create a useable grass-covered events space that can also be used for temporary parking.

The other seating area will be completely refurbished as part of the scheme and provide a place to sit and relax whilst enjoying the views of West Bay.

Mark O’Donnell from the Department for Communities said: “This investment will help create a large events space that will also be used for temporary parking during the 148th Open and, if necessary, during other major events.

The improvements at West Bay will also provide a lasting legacy for Portrush and is the latest example of the ongoing collaboration between the Department for Communities and Causeway Coast & Glens Borough Council in delivering the £17m Portrush Regeneration Programme.”

According to a report delivered to members of the Council's Leisure and Development committee in October 2017, a 935 sq m area dug out more than 40 years ago is inhibiting the potential of West Bay Green.

The report also it says it presents a threat to health and safety.

“The removal of [the] area has therefore been identified as offering greater potential to create a multi-purpose open space which can be used for community activities, recreational use and has potential to create additional parking for temporary periods during major events.

“In addition it would create a safer area of space as the current layout creates some health and safety concerns due to the fall in levels and the lack of boundary treatments.”

The DfC grant is the latest addition to a government funding bonanza totalling £17.5m aimed at preparing the town for next year's golf tournament.

Included in the package are £6m public realm improvements, a £5m railway station and £3m in urban regeneration grants for private sector developers.