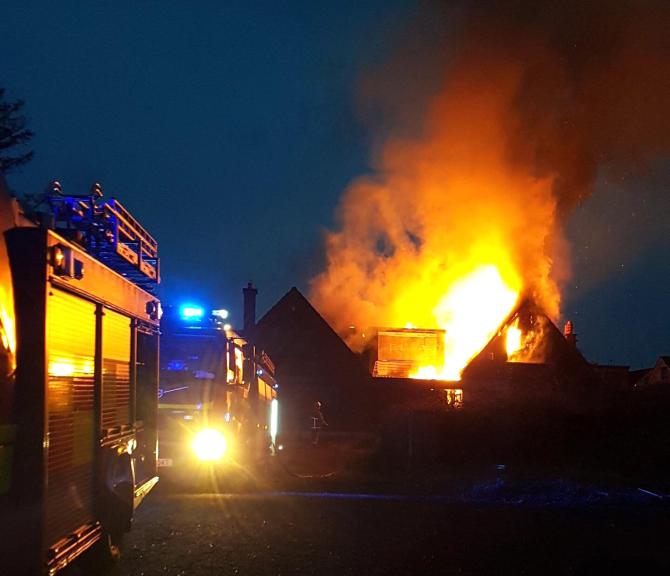 The scene of the blaze at Queens Park last night. Picture: McAuley Multimedia.

POLICE are appealing for information after a report of arson at derelict premises at the Queens Park area of Coleraine last night (Monday 1st April).

Firefighters from Coleraine, Portstewart and an Aerial appliance from Londonderry attended the scene last night at approximately 8.30PM and it took three hours before the fire was dealt with.

Sergeant Black said: “At around 8:15pm, it was reported that the property was set alight by a number of youths in the area. The structure was badly damaged as a result of the incident. Northern Ireland Fire & Rescue Service attended the scene and extinguished the fire.

“We are also investigating a possible link to this incident and a number of bushes set alight at the Princess Gardens area of Coleraine at around 9:20pm last night.

“Enquiries are continuing and we would appeal to anyone who witnessed the incident or who saw anything suspicious in the area at the time of the incident, to contact police on 101 quoting reference number 1254 1/4/19. Alternatively, information can also be provided to the independent charity Crimestoppers on 0800 555 111 which is 100% anonymous and gives people the power to speak up and stop crime.”

In a separate incident, Firefighters from Portrush attended a fire at nearby Princess Gardens in Coleraine. It is believed that both incident were malicious.

A senior fire officer pointed out how these incidents had tied fire crews up and had put lives at risk due to the lack of cover in the area.