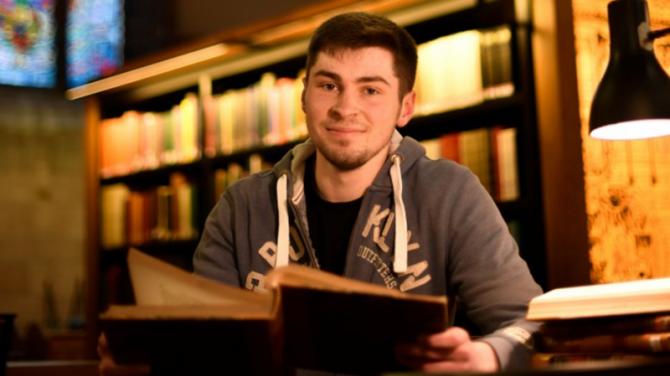 Coleraine's very own Jonathan Woods has made his way into the history books, becoming the first person to crack Andrew Fuller's famous religious code.

Jonathan is a third year divinity student at the University of St. Andrews in Scotland and he has worked tirelessly to decipher the famous Baptist leader's philosophy.

Fuller was a leading Baptist theologian and the code itself is quite unique. The reams of Fuller's sermons have remained unsolved since his death in 1815 but now the local lad can claim that he is the first to decrypt the theological mystery.

Speaking to the Chronicle, the 21 year-old said: “It definitely is not something which I imagined but I am very proud of what I have achieved.

“To be honest it has been a real ‘pinch yourself’ moment and it is nice for me to give some positive press for my home town,” he added.

The fantastic findings have never been done before but the former Coleraine Grammar School pupil had to learn a special type of ancient shorthand in order to get to the bottom of the religious code, something which he admitted was quite difficult.

“I was selected by a professor to get involved and try to crack the code,” he said.

“Learning the shorthand was quite difficult because I only had one sheet which was transcribed so I had to then work out word groupings which allowed me to be able to translate the shorthand,” said Jonathan.

“It took a lot of time and patience and for the first few weeks I felt as if I was not getting very far with it all but I knew I had to work hard and persevere in order to get to the bottom of it.

“This has been attempted many times before and I was told that there was only a 10% chance of getting to the bottom of it but I honestly thought that I would be able to get there in the end,” he added.

Jonathan realises the enormity of his discovery but he insists that he is not planning to stop here. There are many more of Fuller's sermons which exist and he intends to lend his knowledge in an attempt to uncover his philosophy.

“In an academic sense it is massive,” he said.

“I know that there are still a lot more to get through because we have worked on two at the minute but hopefully we are on our way to some more discoveries,” added Jonathan.

With fame comes added attention and Jonathan admitted that things have became a little bit hectic since the news of his discovery emerged.

“This is my 15 minutes of fame,” he joked. “I am actually really surprised in how much people are actually interested in all of this.

“Media and the spotlight is not really my thing but I have not stopped but I suppose that is all a part of it,” he said.

Jonathan has aspirations of becoming a Baptist minister and admits that his latest discovery may help him achieve his ultimate goal.

“I was always aware of how specific the project was but I never dreamt of this,” he admitted.

“I hope that this can be the first step in understanding his thoughts because it is such an honour for me to be able to provide people with an insight into Andrew Fuller's ministry,” concluded the 21 year-old.

Jonathan has also come in for some well deserved praise from one of his former teachers. Mr Mike Dickie teaches Religious Studies at Coleraine Grammar School and he admits that the 21 year-old always had a passion for the subject.

“When Jonathan was at school he studied History, Politics and Religious Studies - three subjects which require a high level of research and he always possessed the characteristics to be able to do that.” Mike told the Chronicle.

“Jonathan was a very hard working and enthusiastic pupil and I noticed very quickly that he had a passion for Religious Studies,” he said.

Mike concluded: “It is great to see past pupils of the school doing so well and it really is an amazing achievement for Jonathan.”

They say the world is your oyster and who knows what the future has in store for Jonathan Woods.