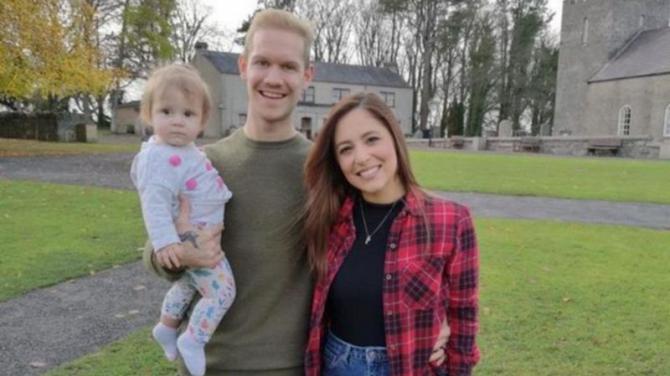 A PORTSTEWART man and his American wife celebrated at Christmas after the threat of being separated in the New Year due to a visa dispute was lifted.

Adam and Christina Campbell met when she was volunteering in Northern Ireland two years ago. The couple have a one-year-old daughter Olivia Rose who was born in the US. But Christina was informed that she faced deportation.

Mr Campbell, 30, who attended Porstewart Primary School and Dominican College, told The Chronicle: “I just don't know how we can live in a world where it's acceptable to take a mum from her child.

“We have done everything asked of us, every piece of documentation required has been handed over, every phone call, every deadline,” he added.

“I am living in east Belfast due to work and studies but as part of Christina’s so called ‘bail conditions’ - that’s what it’s called ‘bail’ - she must reside in Portstewart at my mother’s house.

“So already we have obstacles to being together which is putting a terrible strain on family life and stability. It feels like a black cloud has been hanging over us since the beginning of the year when we had the first refusal.”

The family said they faced being torn apart after the UK government ruled that Christina has no right to stay in the country.

Christina, 25, had been told that she must leave Northern Ireland on January 4. But the Campbells were later informed that Christina did not have to leave while her visa case is being reviewed.

In a statement, a Home Office spokesperson said: “We are in touch with Mrs Campbell and are looking into her case.”

Repeated problems with government paperwork had meant that the three could have been separated indefinitely. New mum Christina faced being transported to and being abandoned in Spain. However her husband Adam spoke out against the bureaucracy.