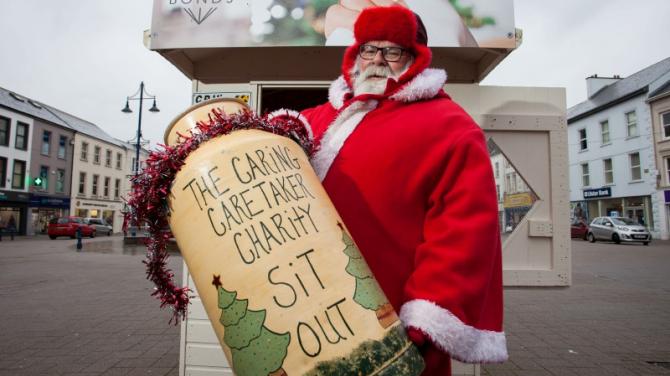 COLERAINE’S ‘Caring Caretaker’ hopes that local people will be kinder than the weather as he embarks on the final week of his annual sit-out in the town.

Davy Boyle admits that the elements have been against him since taking up his traditional spot outside Coleraine Town Hall.

The wet weather has had an impact on the numbers of people visiting the town centre but has failed to dampen Davy’s enthusiasm for his charity fundraiser.

“The weather hasn’t been good this year,” admitted the former Town Hall caretaker.
“I lost Saturday due to the rain.

“I went out and got wet through while there wasn’t as many about as there normally would be.

“I really need the weather to improve this week and for more people to be about the town,” he added.

And he remains determined to finish the year on a high for the sake of this year’s nominated charities.

“I want to thank everyone that has made a donation so far,” continued Davy.