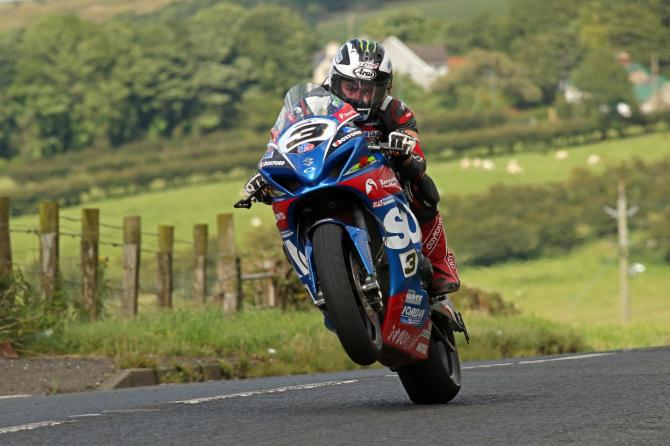 Michael Dunlop is a multiple race winner at Armoy.

ARMOY Road Race boss, Bill Kennedy, has welcomed the news that Michael Dunlop will take his place on the grid for this weekend's event despite still suffering from the effects of a crash on the Isle of Man.

Dunlop, who sat out last year's meeting, is expected to compete for honours in the Race of Legends, both Supersport Races and the Open Race.

The Ballymoney man was a doubt for Armoy after he sustained pelvic injuries following a highside crash during last month's Southern 100 Superbike race. He was second to eventual winner Dean Harrison when he came off the BMW S1000RR.

Despite being battered and bruised, the 30-year-old posted pictures of himself on social media just days later walking about with the aid of crutches. Then on Wednesday, Dunlop was back on his own MD Racing-run Supersport bike for a test in readiness for Armoy.

"I’m absolutely delighted that Michael [Dunlop] will by racing this year and vying for the sought after title of Bayview Hotel Race of Legends," said Kennedy.

"Michael has remained faithful to this Club and never lets us down. The Club and I would like to wish him every success over the weekend.”