Tributes paid to the late William Dunlop at Skerries 100 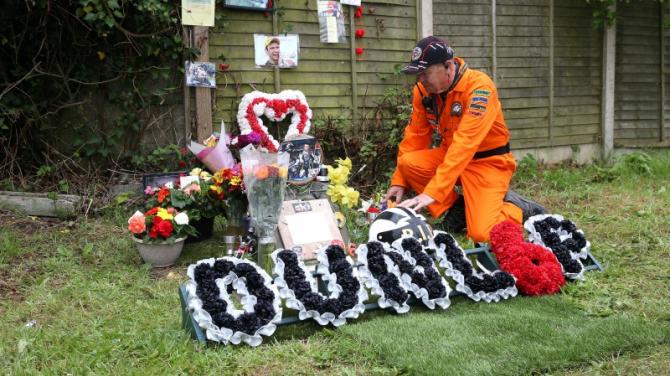 IT PROVED to be a poignant weekend at the Country Crest Skerries 100 last weekend as the road racing fraternity united once again to remember the late William Dunlop.

The much-loved Ballymoney man lost his life after crashing during a practice session at the event near Dublin last year. One year on, a touching floral tribute was unveiled last Saturday in memory of one of the sport's much-loved talents.

Racing got underway on Sunday and it was Dubliner Derek Sheils who stole the show as he went on to register a hat-trick of wins for John Burrows Engineering/RK Racing Suzuki team. Sheils enjoyed victory in the Open Race and Supersport races before completing his treble in the Grand Final. Ballymoney's Daryl Tweed finished in fifth overall in the feature race of the day, one place behind Logan Racing's Neil Kernohan.

A week is a long time in football they say, but the same phrase could be applied to racing for locally backed rider Forest Dunn. Having clinched a double victory last weekend at Enniskillen, Dunn suffered a broken collarbone during a crash in the Open Race at Skerries last weekend.

Gary Dunlop paid the perfect tribute to his cousin William by clinching victory in the 125cc/Moto3 race to make it three wins from his last three starts after picking up victory at Kells and Enniskillen last month. Dunlop cruised to victory ahead of Melissa Kennedy and Nigel Moore. Wayne Kennedy finished in fourth.

Fan's favourite Guy Martin was a surprise entry at Skerries last weekend and was out as a newcomer to the event on his BSA machine. His trip to Ireland paid off as he won the Senior Classic race in a close battle with Richard Ford. Ballymena's Barry Davidson rounded out the podium finishers and clinched victory in the Junior Classic race

Riders will dust themselves down ahead of Walderstown this weekend. After that, it is a trip to Faugheen in County Tipperary before all roads lead to Armoy at the end of the month.