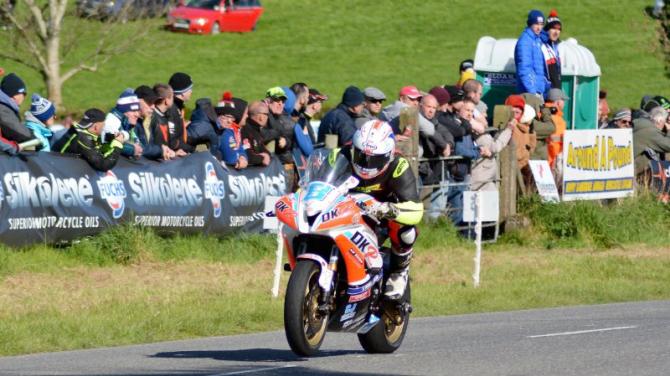 LOCAL road racer Darryl Anderson says that he is ‘ready’ to make his debut at Kells Road Races in County Meath this weekend.

Anderson has enjoyed a strong start to his campaign on the National scene so far this season.

His last outing on the roads was at the Tandragee 100 six weeks ago and it was a positive display in the Orchard County as he piloted his Yamaha R6 machine to a third-place finish in the Senior Support class following up a superb second on the 400cc Kawasaki.

The season opener at Cookstown at the end of April was a mixed bag for the Garvagh man, he enjoyed a rostrum finish in the Senior Support class but an electrical fault hampered progress on his 400cc machine.

The 25-year-old is fighting up top in both championships and admits that he is hoping to capitalise on his positive start to the season.

“I am happy with how things have gone for me so far,” Darryl told Chronicle Sport.

“We had some bad luck at Cookstown but I felt that we made up for that at Tandragee so I can’t complain too much.

“I have never competed at Kells before but I am looking forward to getting out there and testing myself on a new track,” he added.

Coleraine firm supplying the front line in fight against Coronavirus