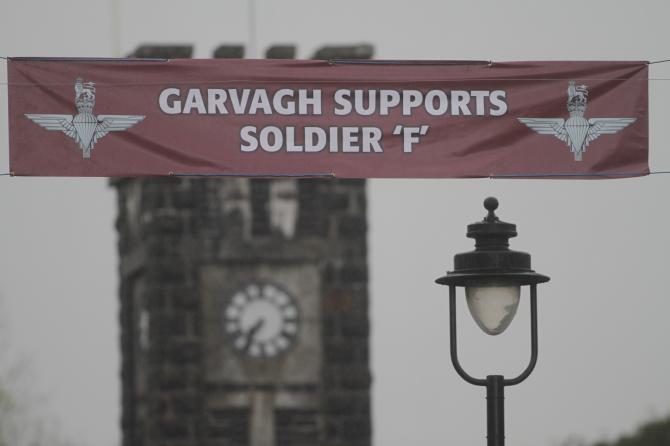 A banner stating that Garvagh Supports Soldier 'F' was erected over Main Street in Garvagh on Tuesday, May 7. WK20-002CR

A DUP councillor has defended the erection of a  banner in Garvagh declaring the town’s support for an ex-soldier facing prosecution over Bloody Sunday killings.

The banner, strung over the Main Street at the time of going to press, carries the Paratroop Regiment insignia and the slogan ‘Garvagh supports soldier F’.

Soldier F, a former paratrooper in his 70s, is the only soldier being prosecuted over Bloody Sunday.

In March the Public Prosecution Service said there was enough evidence to  charge him with the murders of James Wray and William McKinney and the attempted murders of Patrick O'Donnell, Joseph Friel, Joe Mahon and Michael Quinn.

The move has prompted demonstrations from supporters of armed forces personnel who served in Northern Ireland during the Troubles.

Sinn Féin's newly elected Councillor Sean Bateson called for its removal, claiming it aimed to hurt victims of the Bloody Sunday Massacre and foster division. He  suggested any banner proclaiming support for a murder suspect was not appropriate.

“The victims of Bloody Sunday deserve the truth just as much as any victim of the conflict. This banner should be removed immediately,” he added.