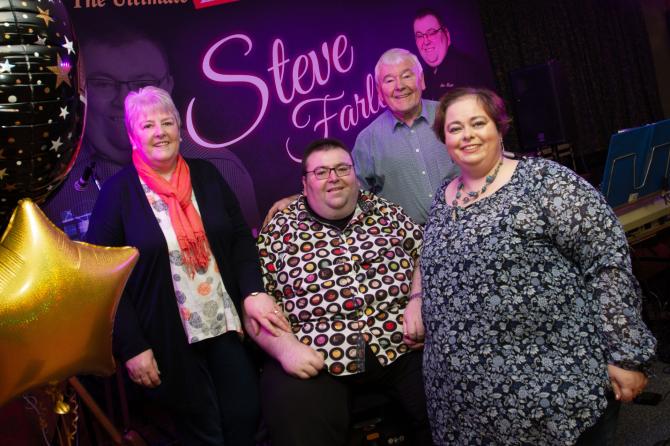 Steve Farlow at the Montra Club on Tuesday, with his mum Margaret, dad, John, and his wife Pauline, for his 40th birthday celebrations. WK20-007CR

On April 29 2016, Steve’s life changed as he suffered a stroke, which had a life changing outcome for the popular musician, as he was left with mobility issues. This factor limited Steve's ability to play the keyboard, which hampered his power to perform and this aspect did not sit well with the big-hearted Ballymoney man.

Written off by medical professionals, who said Steve had a slim chance of ever getting back on stage, however, he has totally defied the odds and is slowly getting back to his best. Having celebrated his 40th birthday last Tuesday evening locally in the Montra Club, Steve's wife Pauline admitted how she is ‘delighted’ to see him returning to full health and back on stage.

“It is fantastic to see Steve back up on stage because he has come such a long way,” Pauline told The Chronicle.

“We are so proud of what he has achieved so far and with a bit of luck you might see him back to his very best in the near future,” she admitted.

The dancehall at the Montra Club was packed last Tuesday evening as people travelled from all over the province to be a part of Steve Farlow's birthday bash, something which Pauline highlighted as a testament to her husband's infectious personality.

“It was such a great turnout, there was well over 100 people there on the night from as far away as Portadown and Belfast which is nice to see.

“It feels like he is getting his music back and we are beginning to see little snippets of the old Steve back,” she said.