McFall aiming for a life in the fast lane 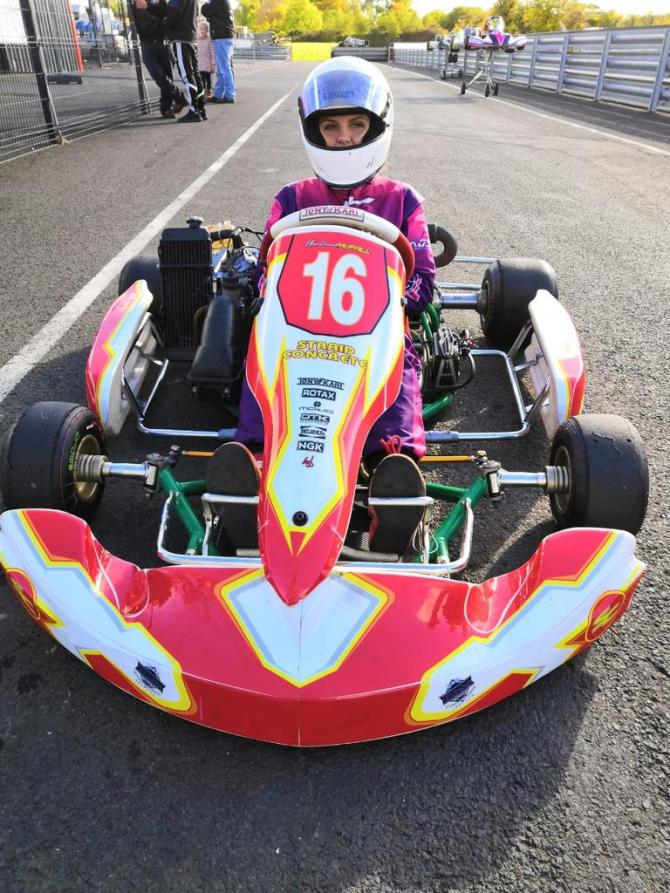 A BALLYCASTLE schoolgirl will travel to France this week hoping to deliver the drive of her life. Ellie-Anna McFall is one of twenty seven young females heading to Le Mans in the north of the country tomorrow (Wednesday), writes Jason Craig.

There, the 16-year-old Cross and Passion pupil will hope to win over judges and nail down a place on the 'Girls on Track – Karting Challenge' European Team. One of six seats are up for grabs, and if McFall is successful she can look forward to receiving expert sporting and educational coaching as part of the FIA's Driver Training camps.

On top of that, one lucky girl will contest the 2019 Karting Academy Trophy. This is perhaps even more significant as it could kick-start a potential career in motorsport on a professional level.

Back in October McFall attended the UK round of the 'Girls on Track – Karting Challenge' at Silverstone. It was hosted by UK Motorsport and Susie Wolff's Dare To Be Different initiative. 120 girls took part, with some having never sat in a kart before. McFall, however, has some experience of competing on short circuits and has won multiple races already at different venues around Northern Ireland.

McFall will fly the flag the UK alongside Jemima Hepworth and Louisa Bell. Portugal, Slovakia, Germany, Finland and Belgium are some of the other countries that will be represented during the four-day event, which gets underway on Thursday. Candidates' fitness will be assessed as well as their media and driving skills.

McFall's father, Gerard, told The Chronicle: “This is an opportunity of a lifetime and she is really looking forward to the whole experience. Ellie-Anna went over to Silverstone last year for a bit of fun; she didn't expect to be one of the lucky ones. When she was told she had been picked she couldn't believe it – we were all taken by surprise.

“There was a lot of talent at the UK heat and plenty of deserving people to choose from, but the judges obviously saw something they liked in Ellie-Anna. Northern Ireland is often overlooked when it comes to driving talent but you only have to look at [triple BTCC champion] Colin Turkington and [Toyota World Rally Championship driver] Kris Meeke to realise we punch well above our weight.”

The 'Girls on Track – Karting Challenge' was set-up by the FIA to encourage more females aged 13 to 18 to get involved in motorsport. Those within the FIA are conscious of the fact it remains a male dominated environment.

“Girls shouldn't be scared to try it,” said McFall. “Karting is one of the cheapest forms of motorsport to get involved with. I personally think this is a great way to get young girls interested.”

One of the people overseeing the scheme is Michèle Mouton, President of the FIA Women in Motorsport Commission. She rose to fame back in 1982 when she finished runner-up in the Drivers' World Championship with the Audi factory team. To this day she remains the last woman to compete in top-level rallying.

“It is so important we encourage more females into the base of the sport and the Girls on Track Karting Challenge has potentially unearthed new talent,” she said. “Everyone involved in the project is incredibly excited by the prospect of a really competitive final.”