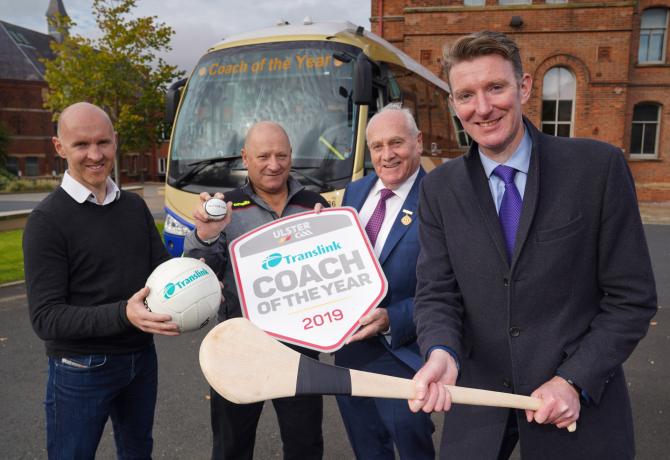 Do you know a possible GAA Coach of the Year?

Now in its third year, the initiative celebrates the work carried out by volunteer club coaches and managers across the province, recognising their outstanding contribution to Gaelic games and local communities here. The awards are free to enter and club coaches from across every code and level in Ulster are eligible.

Players, parents, committee members and supporters have until November 6 to put forward their entry. Following public nominations, a panel of experts including Paddy Tally and Irish News Sports Columnist, Neil Loughran, will select one finalist from each county to go forward to a public vote.

The overall winner will be announced at the Ulster Football Senior Club Championship final and will receive a specially commissioned kit for themselves, and free coach travel for their team, courtesy of Translink.

“Translink launched the Coach of the Year initiative in 2017, alongside our partners Ulster GAA, to recognise the efforts of volunteer coaches throughout many communities here. Each year we receive thousands of nominations and votes, and our sponsorship of this programme has given us the opportunity to see first-hand the great work many coaches do on a daily basis.”

“Volunteer coaches are the backbone of GAA clubs across the country. The sport that we know, and love, would not be the same if they didn’t dedicate the hours they do. As a manager myself, I’m delighted to be involved and encourage people from every county in Ulster to put forward a person they think is deserving of the accolade before November 6.”

To nominate a coach for this award, visit http://ulster.gaa.ie/coachoftheyearaward/. Nominations close at 11.59pm 6 November 2019.