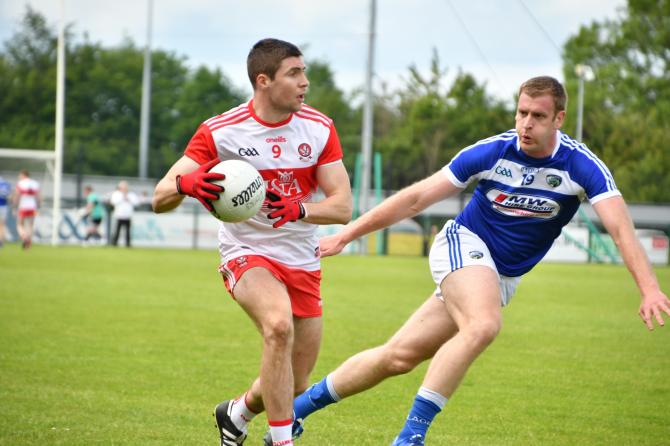 Derry lost out to Laois in the Qualifiers at the weekend.

DERRY'S interest in this year's Senior Football Championship ended at the weekend when they were beaten by Laois at Owenbeg.

The Leinster side were unfancied prior to Saturday's meeting but a strong second half display saw them run out reasonably comfortable 1-13 to 0-12 winners.

Derry had looked good in the opening half but failed to build on their momentum after the break on what proved an ultimately frustrating afternoon for Oak Leaf players, management and supporters.

"We can talk about the goal turning the tide but we just did things wrong, particularly in the second half," said Derry manager Damian McErlain.

"Promotion was definitely the number one priority this year but you could see over the last couple of matches the team has come on leaps and bounds."

There was disappointment, too, for the county's Under-20 footballers who lost to Tyrone at the semi-finals stage of the Ulster Minor Championship.

Paddy Campbell's side were strangely lethargic at the Athletic Grounds in Armagh as they exited the championship.

Meanwhile, Derry's Under-20s take on Armagh in the Ulster Under-20 Football Championship this weekend.

For all the latest GAA news and views, see Tuesday's Chronicle.