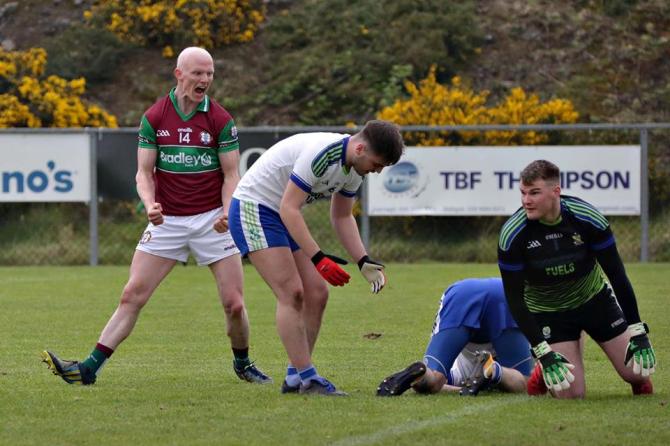 HONOURS even as a point five minutes from the end of normal time earned Ballinderry a share of the spoils at coleraine on a score of Eoghan Rua 2-11 to the Shamrocks’ 17 points.

The sides were level five times in the opening 20 minutes with Ryan Bell, he finished with a magnificent 11 points, pointing a free to leave it 0-7 each.

The Shamrocks then pulled three clear before late points from Gavan McWilliams and Colm McGoldrick left one between the sides, Caolan Mallaghan then fisted over to leave Ballinderry two up at the break, 0-11 to 0-9.

Ballinderry dominated the third quarter and with Ryan Bell deadly accurate from frees and open play they moved 0-16 to 0-11 clear.

With ten minutes to go they were still five up but a double goal strike from Colm McGoldrick in a three minute period turned the game back in Coleraine’s favour.

The first goal came in the 50th minute, Sean Leo McGoldrick’s  quickly taken free found brother Colm to fire low to the corner of the net.