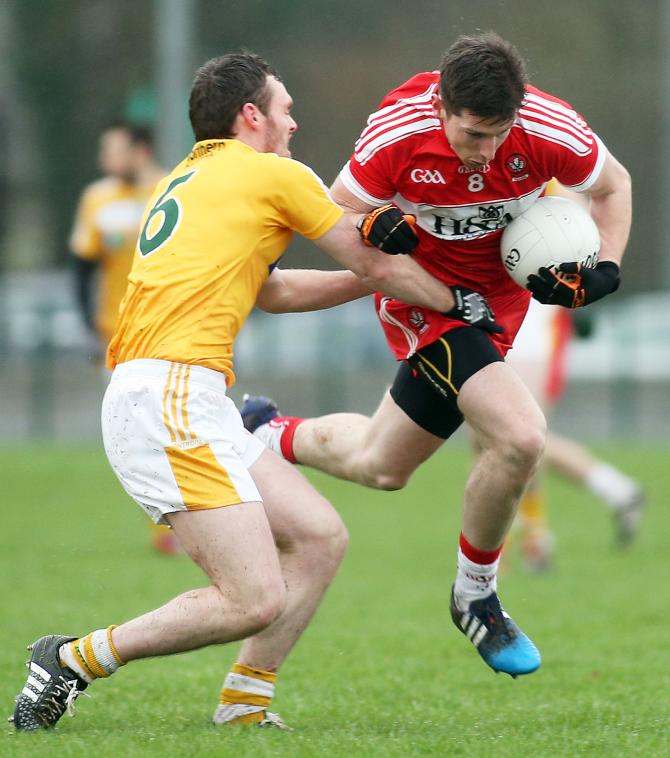 Emmet Bradley was the star of the show as Derry defeated Ulster University to qualify for the last four of the Dr McKenna Cup.

DERRY will meet Tyrone in the semi-finals of the Dr McKenna Cup this weekend.

The two old rivals meet at 2pm at The Athletic Grounds in Armagh on Sunday.

The Oak Leafs qualified for the last four thanks to a convincing 1-20 to 0-7 win over Ulster University at Owenbeg on Wednesday evening.

The big win in Section C saw them pip Section A runners-up Cavan for a place in the semis courtesy of a superior scoring difference, the Breffni men losing by eights points against Donegal.

Emmet Bradley was the star of the show for Derry, the Magherafelt man helping himself to 1-4 of his side's 1-7 first half total. Ulster University failed to register a single score in the opening 30 minutes.

Bradley continued to impress after the break as Damian McErlain's side maintain their promising early season form.

Tyrone, meanwhile, qualified for the semi-finals with a 0-10 to 0-4 win over Fermanagh in a low-key encounter at Healy Park.

The second semi-final, also at 2pm on Sunday, sees holders Donegal take on a resurgent Armagh at Healy Park.