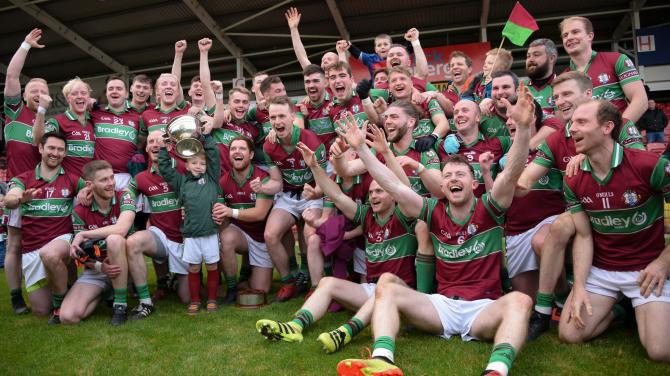 Eoghan Rua players celebrate on the Celtic Park pitch after defeating Lavey 1-12 to 0-12 to win a second Derry SFC title.

A powerful first half performance laid the foundation for Sunday's 1-12 to 0-12 win over Erin's Own Lavey, making a first appearance in the decider since the early nineties.

The south Derry men mounted a brave second half comeback but the Bannsiders held firm to lift the John McLaughlin Cup for just a second time.

"It's great that the club has now won two over a period of eight years and I'm especially delighted for the players.

"They are a great bunch and they deserve everything they get," he added.

The Derry champions go forward to meet Cavan champions Castlerahan in the first round of the provincial series.

For a full report and pics from a memorable day - and a preview of this Sunday's Bathshack Antrim Senior Hurling Championship final between Loughgiel Shamrocks and Cushendall Ruari Og - see this week's Chronicle.