'Nothing can beat being in a club final' 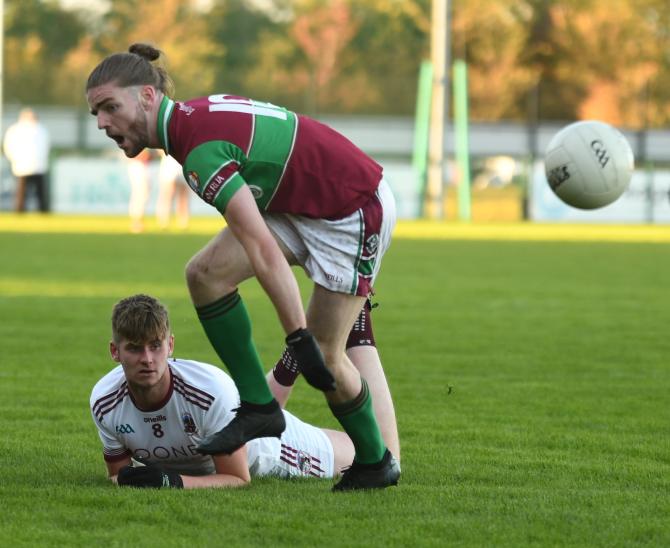 HE'S represented his county and won a Sigerson Cup medal with St. Mary's Belfast, but Ruari Mooney admits nothing beats competing in a county final with your club.

The 23-year-old schoolteacher has played a prominent role as Eoghan Rua Coleraine swept aside defending champions Slaughtneil and bogey team Ballinascreen to book their place in this Sunday's  senior football championship final.

The north coast men start as favourites against Erin's Own Lavey in an eagerly anticipated encounter, but Mooney knows they can take nothing for granted against John Brennan's men.

“I remember in 2010 when we were up against Ballinderry in the final,” says Ruari.

“They were favourites that day because they had tons of experience.

“But we went into that game with no fear and look how that turned out.

“People can call this game whichever way they want, make whoever favourites or underdogs, but both teams deserve to be there.

“It's now up to us to make sure we perform on the day,” he adds.

Too young to have played in Eoghan Rua's breakthrough win in 2010, Mooney was in the team which lost in the 2015 final to Slaughtneil, who would go on to dominate, not only in Derry, but in Ulster.

“That was the first taste for a few of us of a big game,” continues Ruari.

“The likes of myself and Barry Daly are still the babies of the team but the core of the 2010 team is still there.

“There's a good mixture of youth and experience and at this stage all the hard work is done.

“We're in a good place fitness wise so now it's about getting the mindset right for another big game.”

Opponents Lavey have enjoyed plenty of success at underage level in recent years and are regarded by many as a coming team within the Oak Leaf county.

They, too, boast a potent blend of youth and experience and are aiming to secure a first county football title since the early nineties.

“Lavey have some very strong players who have performed well in all their other games but hopefully we can match them and then some,” says Ruari.

“This is what you play football for – to be playing in games like this. We won the league last year but the Championship is the one you want to win. If you want to be seen as a serious team you need to win a championship.

“I've been lucky in that I've played at the top level in colleges football with some brilliant footballers but the club is your own community.

“Playing for your club has got its own meaning and for me nothing can beat it.”