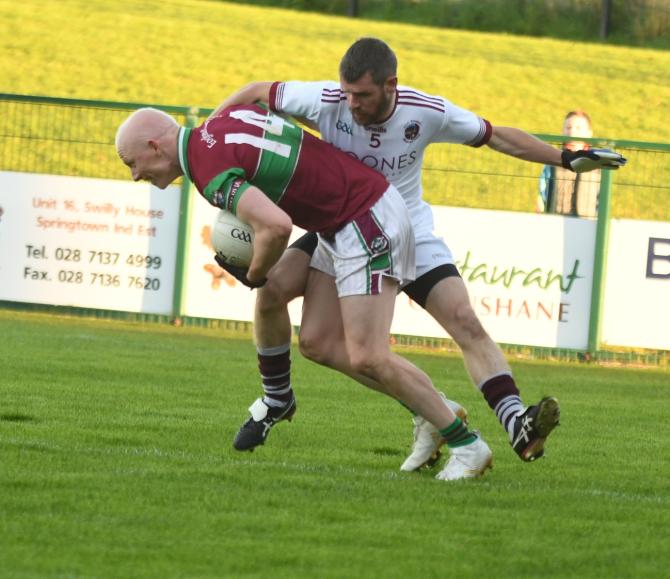 SLAUGHTNEIL'S dreams of becoming the first club side in Derry to win five Derry senior football championships in a row were dashed by old rivals Eoghan Rua Coleraine at Owenbeg on Wednesday evening.

The 2010 champions recovered from a poor start to gain parity with the Emmet's in the closing stages of the second half thanks to a point from full-forward Colm McGoldrick.

And just when it seemed the sides were heading for extra-time having played most of the five minutes additional time up popped full-back Liam McGoldrick to fire over the winning point.

It was a terrific score under pressure from the youngest of the five McGoldrick brothers, particularly as he had missed a free moments earlier which would have clinched victory.

"We're just delighted to get the win as it was another very tight game," he admitted afterwards.

"But it won't mean anything if we don't beat Ballinascreen on Sunday."

Wednesday evening's replay, played out in front of a crowd of over 3,000, was a reversal of the drawn game in which the north coast men started brightly.

This time, the Emmet's dominated the early stages, firing over a succession of points as they looked to steamroller their opponents.

Roghan Rua, in contrast, failed to establish any sort of rhythm. They appeared nervous and their cause wasn't helped by passing up a number of good scoring opportunities in the first quarter.

They eventually made inroads on the Slaughtneil lead in the closing stages of the first half, Ciaran McGoldrick leading the way with two well-taken points.

Four points down at the break, Sean McGoldrick's men needed a big second half and they were helped in no small measure by grabbing the only goal of the game in the 43rd minute.

The influential Ruari Mooney, pushed into midfield at half-time, powered through the Slaughtneil defence before passing the ball to full-forward Colm McGoldrick who palmed the ball into the net past Slaughtneil keeper Anton McMullan.

That major left one between the teams, the holders 0-13 to 1-8 ahead, but more importantly it gave the challengers the belief that they could go and win the game.

The introduction of Declan Mullan in the closing stages provided another boost for the Coleraine men who equalised through his brother Ciaran with time all but up.

With the sides deadlocked and extra-time looking likely, Liam McGoldrick belied his tender years with a composed finish for the winning score to end Slaughtneil's domination of the Derry club scene.

There were ugly scenes at the end of the match as Glenullin referee Dan Mullan came in for abuse from a section of Slaughtneill supporters but that shouldn't be allowed to detract from the club's achievements.

Standard-bearers for the past four years, perhaps time caught up with one or two of their players on this occasion, the burden of incessant football and hurling finally taking its toll on the squad.

That, however, will be of little concern to Eoghan Rua who must now back this win up with a performance against Ballinascreen on Sunday if this season is to be deemed a success.

The 'Screen have held the upper hand over Coleraine in the championship in recent years and will no doubt fancy their chances again, given that they have a free week to prepare.

In Sunday's other semi-final, near neighbours Glen and Lavey meet in what should be an interesting encounter with a place in the final up for grabs.

Click the video below to hear all reaction from Eoghan Rua's Liam McGoldrick following the club's latest success.