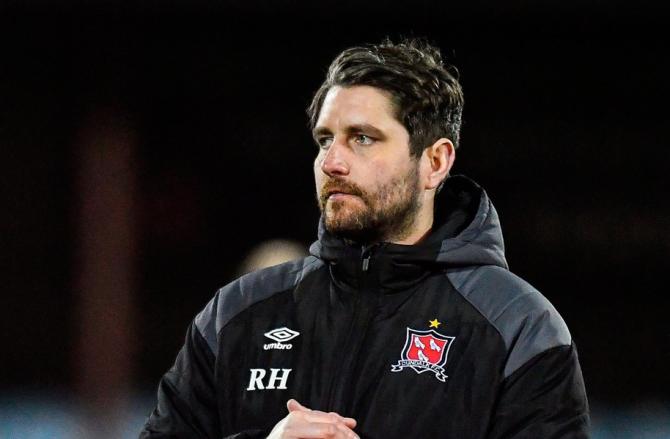 NEW Republic of Ireland Chief Scout and Opposition Analyst Ruaidhri Higgins has credited Coleraine with helping him get on the coaching ladder.

The pair enjoyed tremendous success at both Brandywell and Oriel Park but it is his time at the Coleraine Showgrounds that the 35-year-old maintains was key to his being appointed to the Republic’s new-look backroom staff.

“What Stephen has done over the years, this was a very difficult opportunity to turn down,” admitted Ruaidhri.

“The success we enjoyed at Dundalk was amazing - they were an unbelievable club and a joy to work with.

“If it hadn’t been for Dundalk then I wouldn’t have had this chance, so I can’t thank them enough.

“But you learn everywhere you go and, to be honest, I started getting into coaching when I went to Coleraine.

“I worked with the Academy Under-15 team at the time and that gave me the hunger and desire to kick on in terms of the coaching aspect of the game.

“The people around Coleraine were fantastic - people like Colin McKendry, who is one of the best people I’ve met in the game and who probably doesn’t get the credit he deserves,” he added.

But while his time at Ballycastle Road was memorable in that respect, it was perhaps less so in the playing department.

“That’s probably one big regret of mine,” continued Ruaidhri.

“I wasn’t at the level, playing wise, that I would have liked during my time at Coleraine.

“I was in the latter stages of my career then and probably didn’t reach the heights I would have wanted.

“Oran, the staff, players, board and supporters were all brilliant but it’s still a regret.

“But I’m delighted with how they’re doing: they’ve been execptional - ever since getting rid of me!

“I grew up with Paul Owens, I’m still in touch with a lot of people there and theirs is one of the first results I look for each week.”

When he gets the chance.

These days, the one-time Coventry City man who started out at Limavady club Newtowne, spends most of his time watching football.

Not a bad job, but maybe not as glamorous as it sounds.

“Our first two games are against Bulgaria and Finland later this year so I’ve been busy studying both teams,” added Ruaidhri.

“You have to be fully focussed as it’s a huge part of the game these days. You’re looking for any small advantage that might make the difference.

“Management have so much access now - you can virtually watch any game anywhere in the world - and that applies for all teams and all countries.

“After watching a game you can feel drained because you’re looking at the action in such fine detail but it’s a brilliant challenge for me.”

Ruaidhri has yet to meet up with his fellow coaches and Republic of Ireland players because of the coronavirus pandemic, but expects a training camp to be held before the trip to Bulgaria at the start of September.

“I’m looking forward to meeting up with the players and coaches, and Stephen obviously,” said Ruaidhri.

“It’ll be an unbelievably proud moment for me but also for my family and I’m happier for them to be honest.

“My mum and dad, Mary and Danny, travelled everywhere watching me throughout my playing career so I’m thrilled for them and my three brothers.”

Ruaidhri acknowledges that the new management set-up will be judged on the team’s results but believes that he and his fellow coaches can deliver.

“Look at what Stephen’s done throughout his career, with Derry City, with Dundalk and with the Under-21s.

“He has proven he has what it takes to get results but equally importantly to win matches playing in an attractive way.

“I’m delighted to be a part of it and can’t wait to get going.”