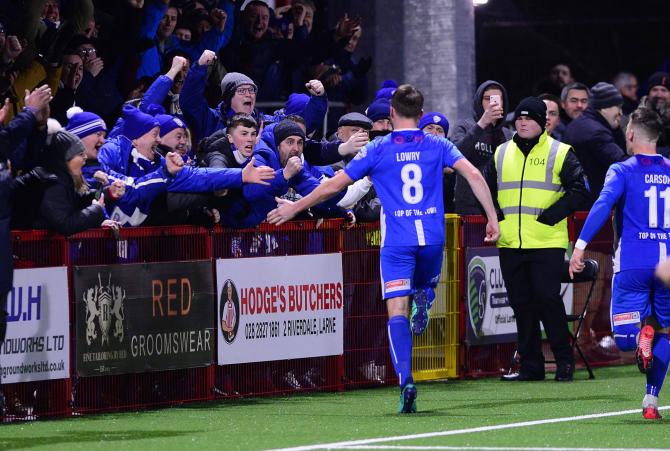 JUST RECENTLY, I reflected on how Coleraine, under manager Oran Kearney, were punching well above their weight.
And about how they continue to trade blows with some of the Irish League’s big-hitters, despite effectively having one hand tied behind their back because of significant financial disadvantages.
They were at it again on Friday, delivering a knock-out blow to Larne’s hopes of winning some silverware on a dramatic night in front of the BBC TV cameras.
The third part of a gripping trilogy, the Bannsiders picked themselves off the canvas twice to draw level before substitute Eoin Bradley provided the coup de grace in the dying moments.
Adjudged not fit enough to start due to a troublesome hamstring injury, the former Derry GAA star is the perfect man to have in your corner on just such a night at Inver Park.
A heavyweight in terms of sporting pedigree, Bradley’s guile, strength and sheer appetite for the battle was instrumental in this victory.
Prior to his introduction eight minutes before half-time, Larne were bossing proceedings. While they didn’t exactly come out swinging from the opening bell, they were boxing clever thanks in the main to Marty Donnelly.
The visitors were forced to soak up a lot of pressure in the early stages but showed a good chin until minutes before the break when Lyndon Kane inadvertently headed into his own net from a Donnelly free-kick.
Oran Kearney’s side cleared their heads during the interval, came out fighting and were rewarded when James McLaughlin struck for a well-taken equaliser.
However, they were back on the ropes again soon after as Larne skipper Jeff Hughes headed home from another set-piece.
With Aaron Jarvis now off the bench and taking his place alongside Stephen Lowry in midfield and Stephen O’Donnell restored to defence, Coleraine began to wrestle back control.
And when Lowry blasted home a penalty after John Herron had handled inside the penalty area momentum had finally shifted.
Now, it was the away side, backed by their noisy support packed into the stand behind the goal their favourites were attacking, who looked the more likely winners.
And so it proved. Jamie Glackin did brilliantly to head the ball towards Bradley and the big striker did the rest. He edged his marker Harry Flowers out of his way before beating Conor Devlin from around ten yards out to spark wild scenes of celebrations on and off the field.
And deal a real body blow to Larne’s dream of Irish Cup for yet another year.
LARNE: Devlin, Flowers, Watson, Sule (A. Mitchell ’78 mins), McDaid, Donnelly, Lynch, Cosgrove, Hughes, Jarvis, Herron.
Subs Not Used: C. Mitchell (GK), Kelly, Randall, Ramsey, Tilney, Andrade.
COLERAINE: Johns, Kane, Mullan, Canning, Lowry, McLaughlin, Carson, O’Donnell, Parkhill (Bradley ’37 mins), Glackin, Traynor (Jarvis ’46 mins).
Subs Not Used: Gallagher (GK), Douglas, McConaghie, McGuckin, Allen.