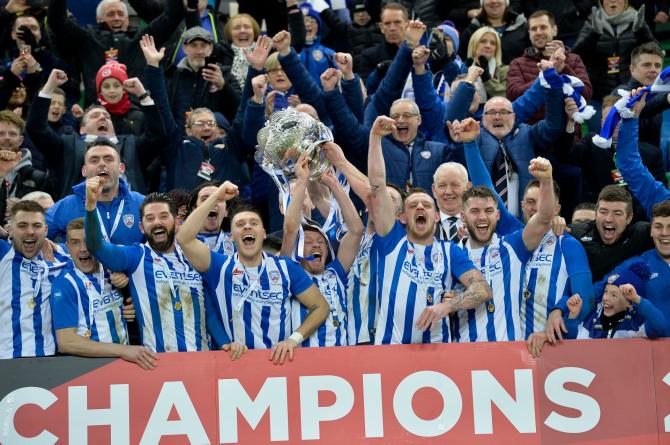 Coleraine ended their 33-year wait for a second League Cup with a gritty 2-1 victory against Crusaders at the National Stadium in Belfast this evening. A goal in each half by midfielder Stephen Lowry and number nine James McLaughlin was enough to get Coleraine over the line.

It was, in some ways, redemption for Bannsiders’ boss Oran Kearney who lost the 2012 League Cup final to Stephen Baxter’s team by a single goal. “The mentality in that group is fantastic,” said the Ballycastle school teacher, who won the League Cup twice as a Linfield player.

Of the two sides, it was Crusaders who settled quickest at the National Stadium. Despite their excellent league form, Coleraine looked nervous in possession and struggled to get out of their half.

Their first sight of goal was a half chance on six minutes when McLaughlin worked some space to get his cross into the box where it was met by Crusader’s goalkeeper, Sean O’Neill.

Moments later former Coleraine talisman Jamie McGonigle latched on to a through-ball, raced clear of his marker and hammered it past Chris Johns from close range.

From that point onwards the Belfast side began to grow in confidence and their desire to get to first and second balls was almost rewarded with a second goal on fifteen minutes when a poor clearance by Johns was charged down by McGonigle. Johns’ blushes were spared as the ball rolled out for a goal kick.

Things went from bad to worse on 21 minutes when, as Aaron Traynor attempted to cross the ball into Crusaders’ danger area, he crashed into the advertising hoarding. He required medical attention to his left shoulder and three minutes later signalled to the bench to be substituted.

His place was taken by Aaron Jarvis who was making his return to competitive action after a two month spell on the side-lines with an injury. In a tactical change, Kearney moved Adam Mullan to the left-back role.

Keen to capitalise on the change of personnel, Crusaders pushed forward in numbers. A hit and hope strike by McGonigle was fumbled by a less-than-convincing Johns. As it squirmed between his legs he reacted to claw the ball back from rolling over the goal line.

Having lacked any real spark up to that point Coleraine’s man-of-the-moment, Jamie Glackin, was clattered in the box and the referee had no hesitation in pointing to the spot. Up stepped Stephen Lowry and from six yards out he made no mistake as he stroked the ball home.

Crusaders finished the first half on top but soon found themselves 2-1 down after the restart. Quick feet by Jarvis freed up Glackin who whipped the ball into the Crusaders’ box at the first opportunity.

The subsequent corner from Glackin – eight minutes after half-time – was flapped at by a hapless O’Neill. McLaughlin pounced to nod it into the back of the net.

Tensions soon boiled over when a McLaughlin tackle on Jordan Forsythe sparked a furious reaction by the Crusaders’ defender. Once order had been restored, referee Ian McNabb noted the names of both men on the back of his yellow card.

Kearney made his second change on 54 minutes, Mullan making way for Curtis Allen who joined the Ballycastle Road set-up on the last day of the January transfer window. Allen would soon be in the thick of the action but not before a moment of individual brilliance by Coleraine livewire, Glackin.

Running towards goal he scooped the ball over the advancing Crusaders’ defender and as it bounced off the ground Ian Parkhill unleashed a venomous shot that required O’Neill to parry it to safety.

Now in the ascendancy, Coleraine had chance after chance, first from the head of McLaughlin who rose to meet a thunderous cross-field pass from Allen only to see it fizz over the bar. Then McLaughlin’s replacement, Matthew Fitzpatrick, controlled a through-ball and fired it low and hard across the penalty area.

By now, Crusaders were the side having to chase shadows.  A long free-kick pumped into the Coleraine box from the halfway line was comfortably collected by Johns who was called in to action seconds later when a cross from the right evaded every Coleraine player – except him.

Crusaders were not done yet, however, and with the last kick of the game McGonigle almost forced extra-time. Having done all the hard work by bringing the ball under control he lashed his shot over the bar and high into the stands.

Knowing the game was up with just seconds on the clock, Coleraine fans began to celebrate the return of the League Cup to the north coast for the first time since 1987.