Tight at the top 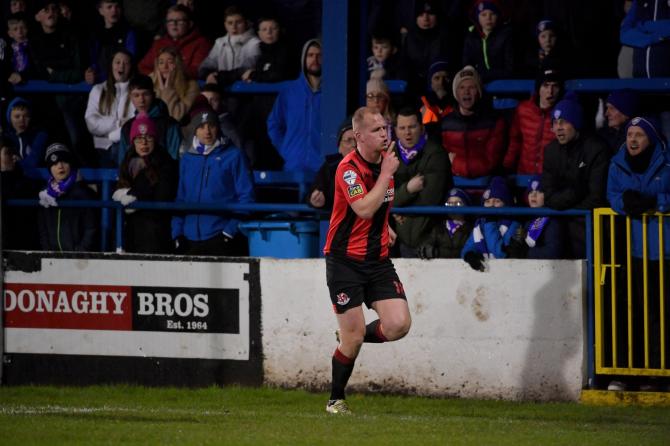 Jordan Owens scored the only goal as Crusaders defeated Coleraine at the weekend.

David Healy's men battled to a 2-1 win at a wind-tossed Solitude to see them return to the top of the Danske Bank Premiership.

The Blues are top by virtue of goal difference, with Glentoran and Cliftonville in second and third respectively.

Crusaders are a point further back in fourth on 49 points with Coleraine in fifth place on 47 points, the significance of Friday evening's game between the two at The Showgrounds coming into sharp focus.

Crues' skipper for the night, Jordan Owens, scored the only goal of the game early in the first half as Stephen Baxter and his players recorded a first victory at The Showgrounds in four years.

Had the Bannsiders taken some of their chances in the second period and eked out a win then they would, incredibly, be a fourth team on 50 points.

Sadly, it wasn't to be: a lack of a cutting edge, not for the first time, proving the Bannsiders' downfall.

A lack of squad depth may also potentially affect the north coast club's title challenge in the second half of a most intriguing season.

That said, they are the third highest scorers in the Danske Bank Premiership behind Crusaders and the Glens and boast the second best defensive record behind Cliftonville and Linfield.

So, while a degree of frustration prevails from the weekend, all is not lost.

Indeed, if, at the outset of the season, someone had offered us a cup final appearance, three points off the summit in the league and in the last 16 of the Irish Cup, then I dare say we would accepted without hesitation.

There is still an awful lot of football to be played this season and now is not a time for panic. It is a time for cool heads and for players, management and supporters to display a united front, beginning this Saturday.

The Bannsiders make the long journey to face Warrenpoint Town, a side with just four league wins to their credit this campaign.

No-one at Coleraine will want reminding that one of those victories came against The Stripes towards the end of last year in one of returning manager Barry Gray's first games in his second spell in charge.

The border club were good value for their 3-1 win that afternoon when the visitors were strangely subdued and appeared at a loss to break down a determined Point defence.

Hopefully they will have learned the lessons of that day: a second defeat of the season at Milltown is simply unthinkable if Coleraine are to have serious designs on maintaining a title challenge into the spring.

For reaction and analysis of Friday evening's defeat to Crusaders and all the other football news, see The Chronicle, out Tuesday.