Bannsiders host Glens at The Showgrounds 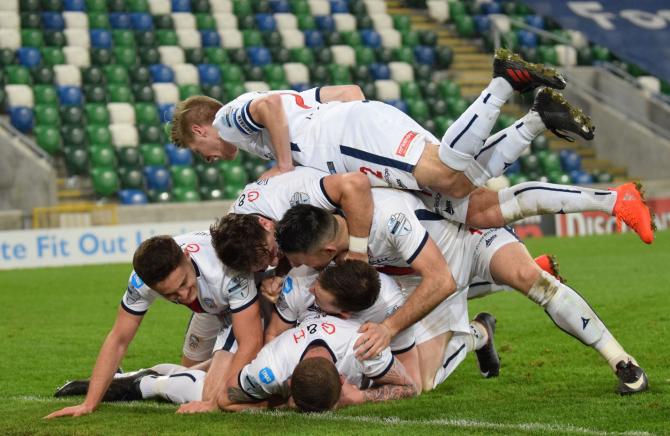 Coleraine, fresh from a win over Linfield in the Bet McLean League Cup, host Glentoran in the league this weekend.

COLERAINE will look to build on Tuesday evening's success over Linfield when they host the second of the 'Big Two,' Glentoran, this weekend.

The Bannsiders' midweek triumph in the Bet McLean League Cup was a welcome relief for players, management and supporters who endured a shock defeat at Institute in the league just three days previously.

It was the team's second loss in three games, having lost at Warrenpoint Town earlier in the month, and came after a lengthy unbeaten run across all competitions.

Despite the defeats, Coleraine remain well placed in the Danske Bank Premiership, just behind leaders Crusaders on goal difference, but need a positive result this weekend to get their league campaign back on track.

They have played the Glens twice this season, drawing once in the league at The Oval before dumping them out of the League Cup in October, and manager Oran Kearney is expecting another tough battle on Saturday.

"We've had two tough games against them already this season and full credit to them for that," said Oran.

"I've seen it lot of times where the money is there but they don't get it right on the pitch.

"They'll say they're a work in progress but I have to say I've been very impressed with them.

"The results they're putting together are impressive and to go to Cliftonville and win is impressive.

"They're building momentum the way anyone would want to and the expectation is there.

"No doubt it will take something of a similar level to Tuesday night to get the three points," he added.

Glentoran manager Mick McDermott, named Manager of the Month on Thursday, admits he is pleased with the progress his side is making this season.

"Saturday will be another massive challenge for our club, but we’re more than ready for it," he said.

"From day one we have always said that our goal this season was to be competitive in every game, and to make teams worry about playing Glentoran!

"We are moving in that direction but are fully aware that we can’t take our foot off the pedal for a single minute, and we won’t! We must perform for 95 minutes each week if we are to keep climbing.

"We go to Coleraine with a sole goal to perform as best we can, to perform for our club and our fans, who we know will make the long journey in great numbers. We know that if we do that then the points may be ours.

"We know Coleraine is a top team and they, too, will be up for this game after a massive win against Linfield midweek. We're looking forward to the challenge," he added.

Coleraine will check on the fitness of defender Lyndon Kane before naming their side after the captain suffered a shoulder injury in the cup win over the Blues.

Elsewhere, the side is likely to be among similar lines to the one which began the game at the International Stadium with Eoin Bradley and Jamie Glackin partnered up front and James McLaughlin on the bench.

Adam Mullan and Aaron Canning are expected to resume their partnership in the centre of defence with the remainder of the team along familiar lines.

A large crowd is expected at Ballycastle Road and supporters are advised to get to the ground early.

Keep an eye on our socia media channels for updates from Saturday's game.