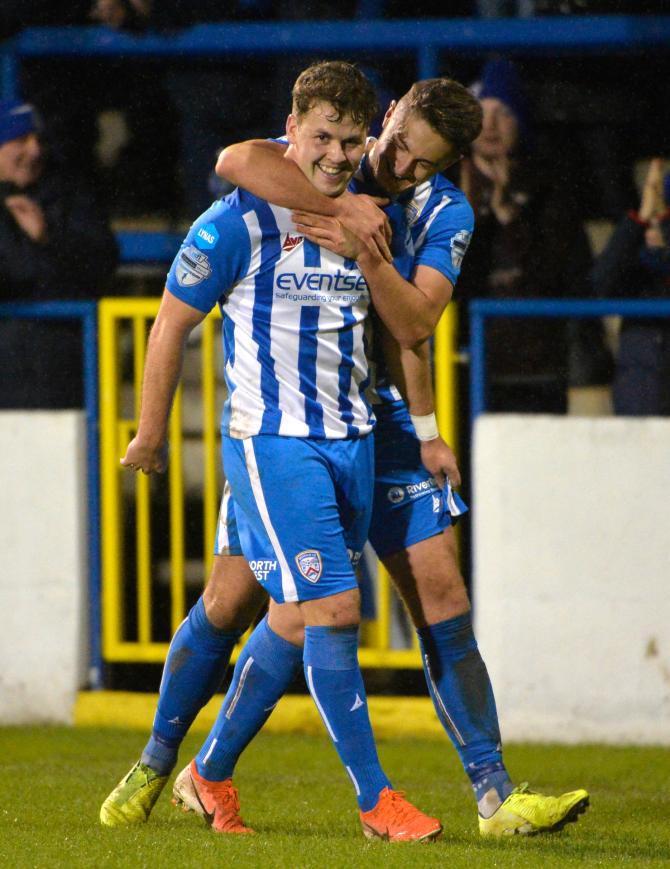 Midfielder Ben Doherty made it 12 goals for the season with a hat-trick against Dundela on Tuesday evening.

COLERAINE will play either Crusaders, Institute or Linfield in the last four of the Bet McLean League Cup after all four came through Tuesday night's quarter-finals safely.

The Crues scored a late winner to defeat Ballymena Utd in extra-time, Linfield edged out Cliftonville 1-0 while 'Stute got the better of Newry City.

As for Coleraine, well they were the biggest scorers of the night, hitting five against Championship club Dundela in a 5-1 win at Wilgar Park.

Leading the way, as he has done so often this season, was midfielder Ben Doherty, who notched his first senior hat-trick at the east Belfast venue.

Doherty's first goal early in the opening half - a wonderful left foot volley from just outside the penalty area - settled any nerves Oran Kearney's men may have had.

And when he added a second soon after, again a sweetly struck effort from just inside the area this time, Coleraine were firmly in the driving seat.

Doherty had a great chance to complete his hat-trick when referee Jamie Robinson awarded the visitors a penalty but the Derryman saw his effort saved.

But he needn't have worried as moments later the Bannsiders got a second penalty after it was adjudged Lyndon Kane had been fouled inside the box.

There was little question but Doherty would take his second spot-kick of the night and he duly despatched it to make it three for him on the night and 12 for the season.

That was how it remained at half-time and, at this stage, it appeared a case of how many would Coleraine score.

But credit to the home side who emerged re-energised after the break. They obviously felt they had nothing to lose and actually took the game to their opponents from the restart.

They dominated possession in the early stages of the second half and were duly rewarded with a goal, Owen Beggs striking to reduce the deficit.

However, substitute Alex Gawne eased any Coleraine nerves and re-established his team's three goal advantage shortly after coming on, capitalising on a defensive error to score from close range.

And the scoring was completed near the end when midfielder Josh Carson neatly tucked away a right foot effort from a tight angle for his first goal of the season.

All in all this was a most pleasing night for manager Oran Kearney and his players.

The Ballymoney man made four changes to the starting line-up, with one eye on Saturday's Danske Bank Premiership game against Dungannon Swifts, but it didn't weaken the side unduly.

James McLaughlin and Emmett McGuckin provided a powerful presence up front in the absence of the rested Eoin Bradley while Ian Parkhill provided pace and industry in midfield as Stephen Lowry got the night off. Gareth McConaghie, another in need to match time, came in to the centre of defence.

Not that you would know from speaking to him: dropped into the conversation post match, the level-headed boss said simply that records like that meant nothing to him.

For him, it's all about looking forward, not back.

* The semi-final draw of the Bet McLean League Cup will take place on BBC Radio Ulster's Sportsound programme on Saturday.