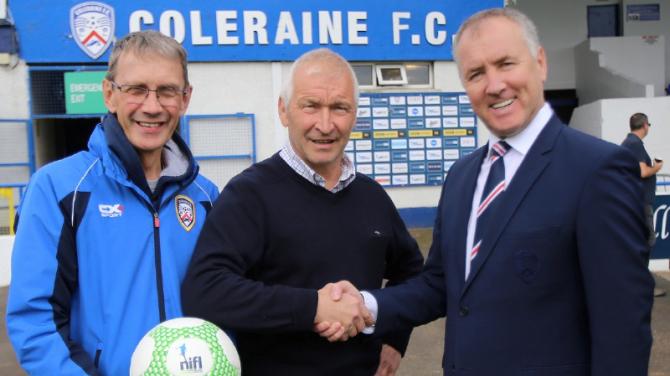 Coleraine FC Chairman Colin McKendry and Club Pastor, Rev. Robert McMullan welcome Gary Tasker to the Club. Gary takes up his duties immediately with a view to taking Coleraine to the next level off the field of play.

COLERAINE Football Club has enjoyed a change of fortune since the return of manager Oran Kearney back in July but now the Bannsiders are set to take their off-field business to the next level after bringing Yorkshireman Gary Tasker onboard at The Showgrounds.

Gary Tasker comes highly recommended and he is set to help the Stripes progress certain aspects of the club, such as the overall match day experience, to the next level. Having spent 30 years involved with sport at the highest level, he is no stranger to hard work. The ethos of supporting local clubs rings true with Gary, who has been on the terraces at Coleraine for a number of years.

Before he settled down with his wife and family in Ballymoney, Gary spent 20 years at Bradford Bulls when they were the flagship club for Super League. He worked his way through the ranks to become the General Manager at the club.

A career change saw Gary move in a different direction at the turn of the millennium following 11 years with the Bulls. He made a successful switch to pastures new, joining Super League (Europe) Ltd in 2000. Gary went on to become the Rugby Football League's Director of Community Development after he introduced a very successful community programme which he had developed during his time at the Bradford Bulls, something that he seems keen to introduce at Coleraine in the near future.