McLaughlin returns ahead of Glenavon clash 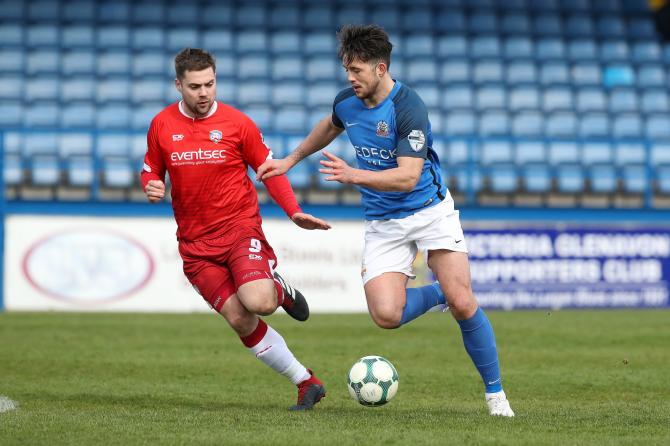 COLERAINE manager Oran Kearney says that he is expecting a tough challenge against Glenavon at Mourneview Park this evening (KO 8pm).

The Bannsiders remain unbeaten this season in all competitions and will be keen to keep building on recent results. Coleraine failed to pick up a win last season during Rodney McAree's tenure, taking only two points from a possible twelve.

The first meeting between the sides last season was at The Showgrounds last October. Stephen Murray was the hero that day as he netted a hat-trick as the Lurgan Blues enjoyed a 4-1 victory. Gary Hamilton's men hammered the Bannsiders 4-0 in the game which was broadcast live on BBC back in December, whilst the two remaining games finished in two 1-1 draws back in January and April respectively.

In the ten meetings stretching back to the 2016/17 campaign, Coleraine has picked up two wins against Glenavon with the sides sharing the honours on six occasions. With a matter of hours remaining before kick-off, the Bannsiders will be hoping to come away with all three points this evening.

“It will be a really tough game and for both teams, it will be our third game in six days,” Kearney explained after his side's midweek victory over Annagh United.

“Obviously, having Eoin Bradley and James McLaughlin away against Annagh United people were worried about where the goals were going to come from.

“It is great that Ian Parkhill weighed in with goals but obviously it will be great to have Skinner and James back and at it,” he said.

The Bannsiders will be without Eoin Bradley who is suspended this evening, whilst defender Gareth McConaghie is also expected to be an absentee as he has picked up a knee injury. James McLaughlin will be back in the matchday panel as he has now served his three-game ban.

*You can read full reaction from tonight's game inside next week's Chronicle, out Tuesday.