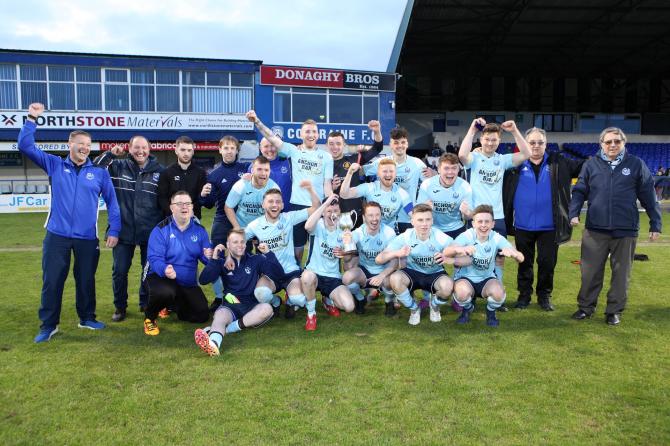 Portstewarty/UUC players celebrate their victory over Portrush in the final of the Coleraine and District Morning league Cup at the Coleraine Showgrounds.

PORTSTEWART/UUC completed a memorable double when they defeated Portrush Reserves in the final of the Coleraine and District League Cup at Coleraine Showgrounds on the May Day holiday.

Previously, the composite team had annexed the league title following a remarkable year in which they only lost two league games.

Luke Taylor fired the winners in front before Chris Hansen put the game beyond Portrush with a second goal of the game towards the end.

Elsewhere, Balnamore retained their Hutchinson Tiles Knock-out Cup but only after a titanic struggle against final opponents Finn MacCools.

The Ballymoney men were pushed all the way before triumphing 5-3 to confirm their reputation as the league's knock-out specialists.

For reports and photos from both finals, plus all the latest news from the Score Monday and Wednesday night leagues, grab your copy of The Chronicle.