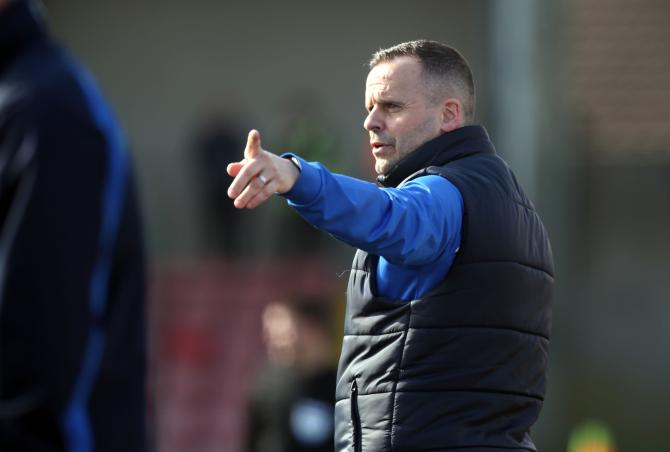 Ahead of Coleraine's crunch derby clash with Ballymena United tomorrow, Bannsiders' boss Rodney McAree insists that his side will need to be on top form if they are to muster a win over the Sky Blues.

The derby games this season have been feisty affairs this season as Coleraine have been reduced to ten men in the previous three meetings between the sides. The opening meeting of the two ended in a 2-2 draw back in September as striker Eoin Bradley was given his marching orders after a tussle with Jim Ervin.

The Boxing Day game was a six goal thriller which ended in a 3-3 draw although James McLaughlin saw red. Last month's meeting at The Showgrounds in Coleraine was one to forget as Ballymena enjoyed a 4-0 victory much to the delight of the travelling support.

Focussed firmly on tomorrow's encounter at Ballymena, McAree insists that his side must keep their discipline if they are to get a result from the game.

Speaking to Chronicle Sport, McAree said: “It is another massive game and we are definitely looking forward to it.

“It is a derby match so it will be a big occasion but we need to keep our heads and ensure we finish the game with eleven men on the pitch to give us a chance.

“David Jeffrey recruited well at the start of the season and their transfer business has helped them get to where they are now – we know it will not be an easy game,” he admitted.

After an indifferent campaign, McAree has one eye on the European play-offs and admits that it will be a 'challenge' but one that he and the squad are relishing.

“I feel that we have been unlucky in recent weeks with decisions and I know that sounds like crying but I am sure that I am not the only person that feels that we have not got that little bit of luck that you need sometimes,” said McAree.

“I though last week against Glenavon we were better defensively and our performance was better so I am hopeful that we can keep building towards the end of the season.

“The mood in the camp is good,” he added. “Last night we had a good training session and the atmosphere around the squad is fantastic.

“On our day I know we have quality players who are more than capable of registering wins against any team in this league.”

Coleraine will be without the services of Aaron Burns and Stephen Lowry through injury whilst the defensive duo of Adam Mullan and Gareth McConaghie miss out through suspension.

Lyndon Kane, Aaron Traynor and Alexander Gawne remain long term absentees but McAree insisted that the trio are making good progress and is hopeful they should be back in action for pre-season.