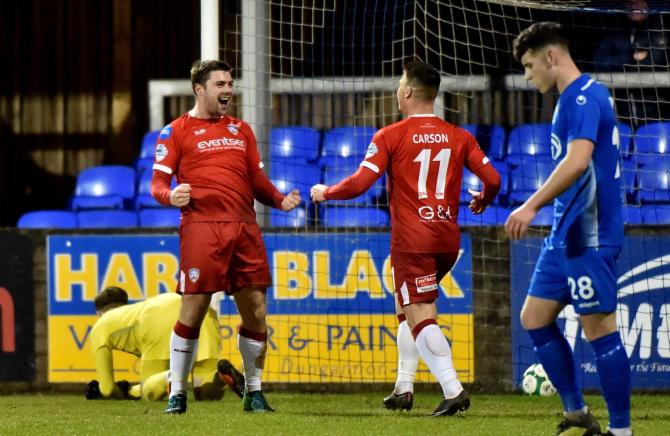 IT was a happy return to Stangmore Park for Coleraine manager Rodney McAree on Tuesday night as his new team defeated former club Dungannon Swifts in a rearranged Danske Bank Premiership game.

It was the Dungannon man's first time back as as opposition manager since leaving the Swifts to replace Oran Kearney in the Showgrounds hot-seat at the start of the season and was a night to remember.

The omens weren't great in the opening minutes as the home side took the game to their opponents but once striker James McLaughlin pounced to score the opening goal early in the first half there was only ever going to be one winner.

McLaughlin, enjoying a rich vein of form in front of goal recently, showed all his predatory instincts to latch on to an inviting cross from strike partner Jamie McGonigle and guide the ball past Alex Moore somewhat against the run of play in the 13th minute.

The goal seemed to settle the visitors and nine minutes later they doubled their advantage thanks to a fine strike from captain Stephen Lowry.

The Limavady man reacted quickest when the Dungannon defence failed to deal with inswinging Ben Doherty corner to swivel and power a left foot volley high into the roof of the net.

The Bannsiders pretty much dominated most of the game thereafter, offering little in the way of chances to a home shorn of the attacking threat of striker Daniel Hughes, absent through illness.

His replacement, former Linfield and Crusaders front man Michael Carville, did have a great chance to pull a goal back for the hosts near the end but he blazed his effort high and wide from the edge of the penalty area.

Cormac Burke, who had earlier replaced the injured Josh Carson, went closer in the dying minutes but his well-struck effort crashed off the crossbar after he had been played through by fellow sub' Dean Shiels.

But it proved immaterial on a night when the travelling Coleraine supporters got a glimpse of what their new-look side may be capable of.

Dylan King, in only his second appearance for the club since leaving Glenavon, impressed alongside Gareth McConaghie in the centre of defence, while full-backs Adam Mullan and Mark Edgar were resilient in defence and always willing to join in the attack.

Stephen Lowry and Ben Doherty excelled in the middle of the pitch while Jamie McGonigle never stopped trying, despite his obvious frustration at times.

Jamie Glackin grew in confidence as the match more on while Burke and Shiels played their part after coming off the bench.

And with players of the ilk of club captain Stephen O'Donnell, Aaron Canning, Ian Parkhill, Dylan Davidson and Aaron Burns not even featuring, there is a growing confidence that Coleraine may finally have a squad capable of challenging again for silverware.