New faces for trip to Ards 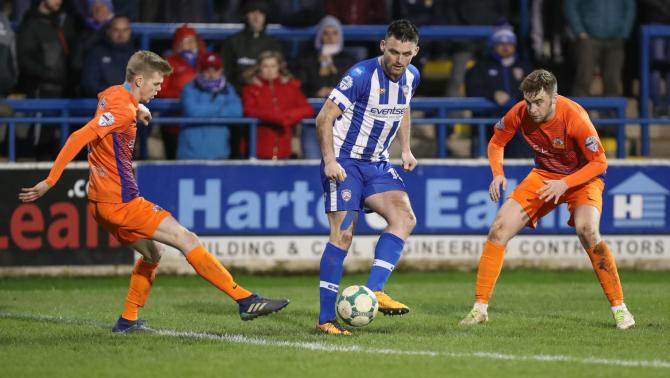 Coleraine's options will be bolstered by the prescence of several new faces for the league visit to Ards on Friday evening.

COLERAINE'S latest recruits - Cormac Burke and Dylan Davidson - are expected to be included in the travelling party as the Bannsiders look to extend their unbeaten run to six games away at Ards on Friday night.

The pair joined the club in midweek, bringing the number of new faces signed by manager Rodney McAree in the January transfer window to five.

"I'm delighted to get both on board," admitted McAree, who hopes to shrug off a dose of the flu for the trip to the Bangor Fuels Arena.

"We've been light on the ground in terms of numbers so it's great to get an extra couple of bodies in.

"Cormac is someone I have worked with before at Dungannon and is someone I rate while we knew Dylan was coming out of contract in the summer.

"Both are excited about the new challenge and it's up to us to get a smile back on their faces and get them enjoying their football again.

"The squad is looking a lot stronger now which will help over the second half of the season."

The situation is a lot less clearer as regards midfielder Darren McCauley.

The Derry man remains on the transfer list amid interest from a number of clubs, including Derry City and Scottish side Inverness.

However, it's believed Coleraine have not yet received a firm offer for the player who remains under contract at The Showgrounds until the summer.

It's similarly confusing regarding the future of much talked about Institute striker Michael McCrudden.

Institute say they have received an offer from Coleraine which doesn't meet their valuation of the player, with Derry City waiting in the wings.

"It's always a hard game against Ards," he continued.

"We've played them a couple of times already this season and we know they can be hard to break down.

"But we want to go there and win and maintain our recent progress."