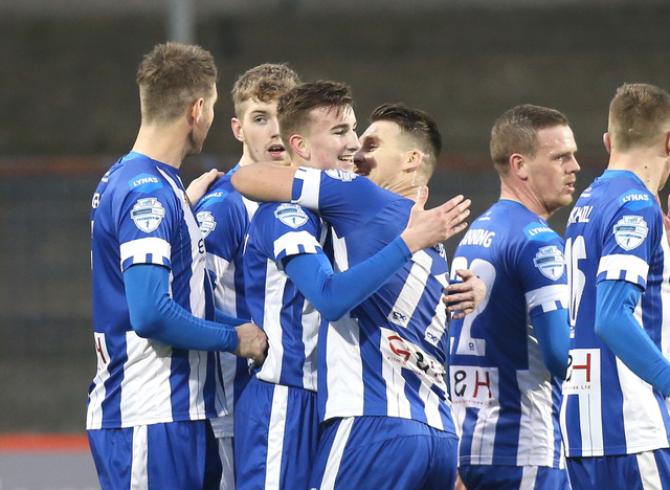 Coleraine players celebrate after Alex Gawne's deflected shot opened the scoring against H&W Welders in their Tennent's Irish Cup tie at the weekend.

COLERAINE began their defence of the Tennent's Irish Cup with a comfortable 2-0 home win over Bluefin Sport Championship club Harland and Wolff Welders at the weekend.

An own-goal from Welders skipper Chris Morrow and a second half strike from sub' James McLaughlin saw the Bannsiders safely through to a sixth round meeting with Dergview.

"It wasn't the prettiest of games but it is job done and we move on into the next round," said manager Rodney McAree.

Meanwhile, defender Mark Edgar, who came on as a sub' in the win, admits he is delighted to be back at the club for a second spell.

The 21-year-old has signed a short-term deal until the end of the season, a year and a half after departing the Showgrounds in Oran Kearney's spell in charge.

"It was a no-brainer for me rejoining the club," admitted the Coleraine man.

"I am delighted to be back."

For the full story, see The Chronicle.