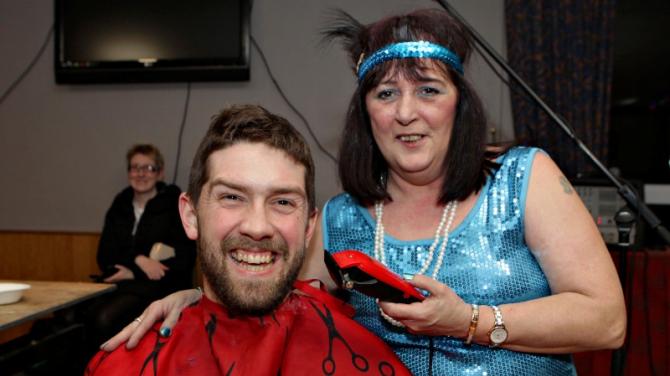 THE heartbroken family of a much-loved mum who died from cancer have raised more than £5,000 after fulfilling her final wish and staging the charity night she had organised in her memory.

Much-loved Wilma McKee, who was a ward clerk at Causeway Hospital for 19 years, lost her battle for life on February 28.

The 57-year-old mum-of-two, who lived at Athol Avenue in Coleraine, was diagnosed with a very rare and aggressive cancer just days before Christmas and given six months to live.

But, despite radiotherapy, Wilma passed away peacefully at her late father William's home just 10 weeks later.

Before she died grandmother Wilma made plans for a fundraiser in aid of Macmillan Cancer Support at the town's Montra Club.

“We were hoping Wilma would be well enough to attend,” her youngest sister Heather Gault told the Chronicle. “It was her last wish but sadly it wasn't to be.

“Wilma had set the date; she loved dancing and had organised a salsa class as well as the entertainment. She had even made sure her son Johnathan had printed posters.

“It was Wilma's way of thanking the charity for all the help they had given her and our family. She also wanted donations for Marie Curie instead of flowers at her funeral; both charities were incredibly supportive. She told us she had enjoyed a good life and wanted to give something back,” recalled Heather, 55, of Burnside Park, Coleraine.

“About a month before she died Wilma told us she wanted to hold the charity night but she deteriorated so quickly we had to fundraise without her.

“It's really hard, now she's gone, but we were determined that the night would go ahead as Wilma had intended. Wilma's daughter Laura had her head shaved while Wilma's son had his legs waxed. There was also a a raffle with donations to Macmillan Cancer Support at the door.

Laura told The Chronicle: “We have raised £5,105.26 and are so overwhelmed by the support we have received; we know mum would be so proud.”